Why is cash still king for travel despite the cashless wave?

If you’re spending money domestically (in Singapore), paying via cashless methods is convenient, safe, and there are probably rebates from it. There is a huge emphasis on going cashless by both the public and private sectors, and as of writing (2019), there are more than 40 mobile wallet options in Singapore.

Multi-currency accounts and prepaid cards targeting travellers are also becoming increasingly popular, with almost 1 launched every month in Singapore in 2019.

However, despite the high level of competition and subsidies in the cashless market, cash still remains king for overseas payments. According to a poll by DBS and Visa in 2016, 95% of Singaporeans change money before they travel, and a more recent study in 2019 by marketing research firm J.D Power showed that “cash is still the preferred choice”.

To better understand why cash is still preferred, we spoke to some of our customers, and we have listed the most common reasons for using cash overseas.

Cash is Often the Cheapest

This is because most multi-currency account or travel card providers do not manage foreign exchange positions themselves; the exchange rates are usually provided by a bank or foreign exchange liquidity provider. 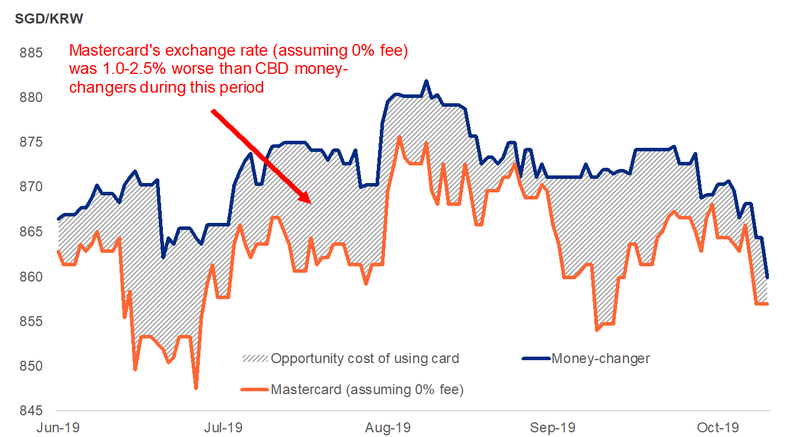 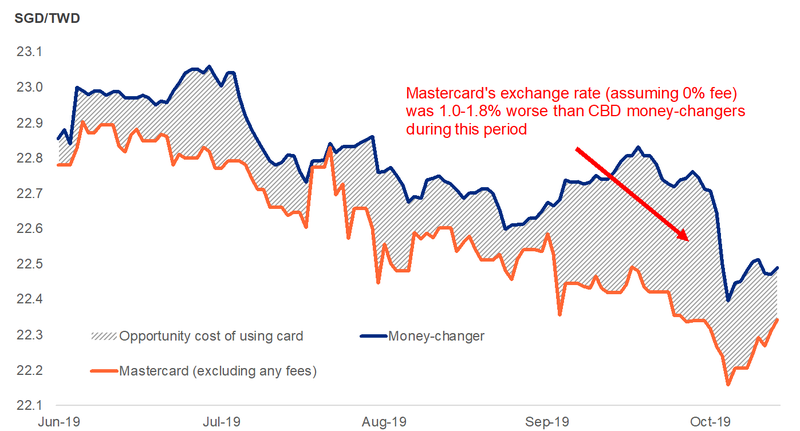 Many F&B places, especially family owned cafes, offer discounts for paying in cash. Contrary to popular belief, it is not illegal for merchants to pass on card fees, though it may violate the terms of service between the merchant and card network in some jurisdictions (like Singapore).

In other countries, the reverse is true. In Australia, the Reserve Bank of Australia (Australia’s central bank) introduced a regulation that required Visa and Mastercard to remove their “no-surcharge” rule in the terms of service to allow merchants to pass on debit or credit card fees to consumers. 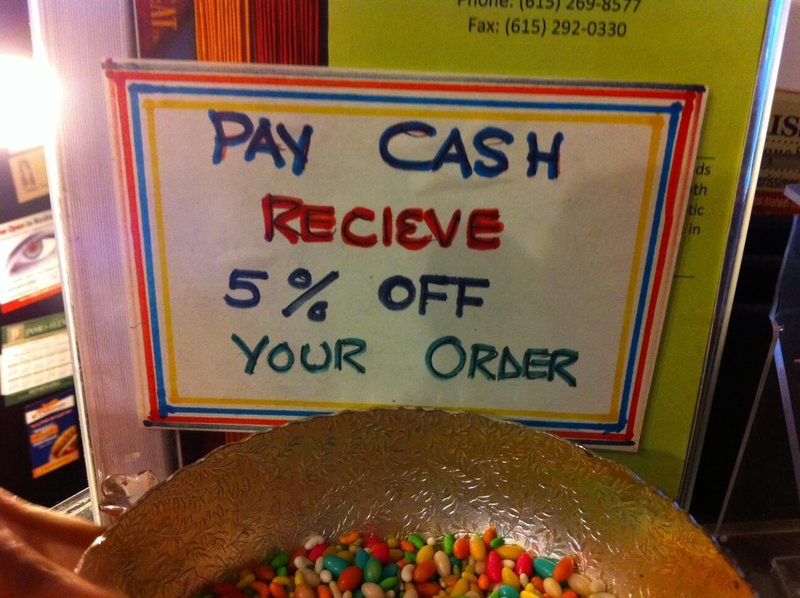 Thus, you may find merchants offering you a discount if you pay in cash. Even in countries without such regulations, merchants may still offer you a discount. In fact, the highest discount we heard from customers for paying in cash is  10% at a restaurant in Italy.

Cash is the Most Reliable

There are also many non-economic reasons for customers to prefer using cash overseas. The last thing you want happening on your holiday is getting stranded without any means of making payment. The risk is the highest if you’re using a multi-currency account or a prepaid travel card tied to a mobile wallet as you may not be able to top up the wallet if the app faces an outage or scheduled maintenance, or if you do not have internet access, or if you get logged out without any means of receiving OTPs. 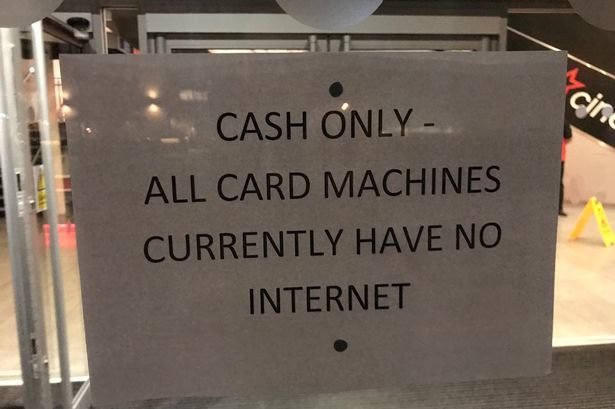 You may have heard of friends (or even experienced it yourself) getting stuck at the cashier overseas when the mobile wallet freezes, and the cashier is unable to process the payment. Outages by card networks are very uncommon but may still occur, such as these 2 major outages in 2018 (Massive Visa Outage, Mastercard suffers outage).

Using cash avoids the risk of any pending top-ups, app outages, blackouts or network outages, which is especially important when you’re in an unfamiliar country and do not speak the local language.

Cash is the Most Widely Accepted

Cash remains the most universally accepted form of payment throughout the world, and this is especially important when you’re travelling in unfamiliar places. While there are places that only accept cards, these cases remain the exception rather than the norm. 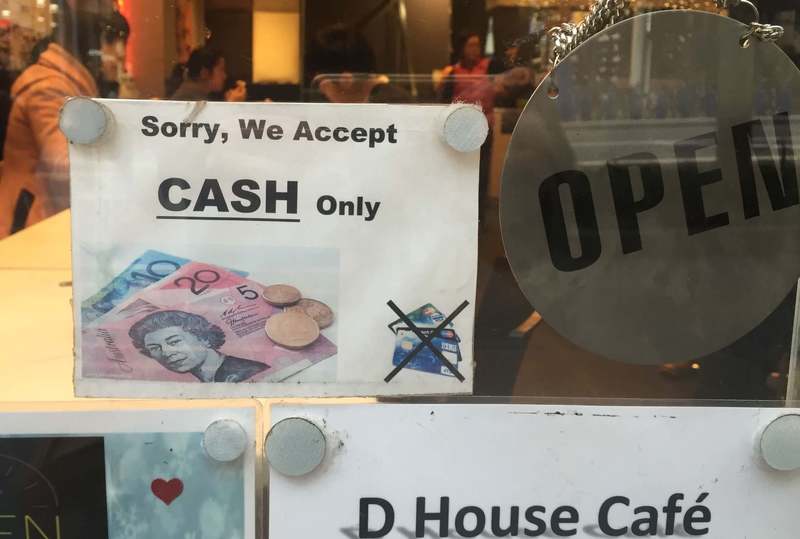 For most parts of the world, your cash is more likely to be accepted than your card. Customers explain that they do not want to miss out on anything (especially street stalls) just because they were unable to make payment. Even many food stalls in developed markets such as Japan or Korea (and Singapore) still only take cash.

With cards, there is an added risk of falling prey to fraudulent activities. According to payment solutions firm ACI Worldwide, more than 1 in 3 consumers in Singapore were a victim of card fraud in 2016. The risks increase when you’re overseas, and as a traveller, you are statistically more likely to be a victim of card fraud than getting robbed or losing your cash.

The most common card frauds are:

By the time the fraudulent charge on your card occurs, you may have already left the country or be unaware of the extra charges. With cash, your payment and worries end the moment you hand over the cash. That means that you will never get a bill shock from using cash.

Of course, there are also drawbacks of using cash. The most common reasons to not use cash overseas is the risk of theft, the hassle of payment, and managing leftover currencies. However, did you know that you are statistically more likely to be a victim of card fraud than getting robbed? Either way, you may want to get yourself covered with travel insurance for a peace of mind 😊

Another concern is the hassle of getting foreign currency cash in the first place; the time and effort taken to queue at the ATM and/or money-changer, or looking for an ATM in a foreign country.

Whatever the case, we'd still recommend travelling with a combination of cash, credit cards, and ATM cards. Since its an unfamiliar and foreign destination, you''ll never know if the establishment accepts card, or if you run out of cash. Happy travels! 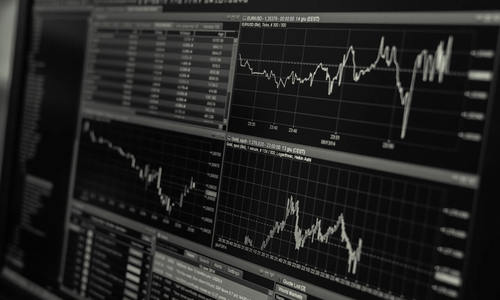 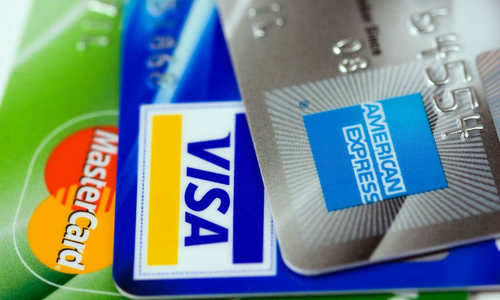 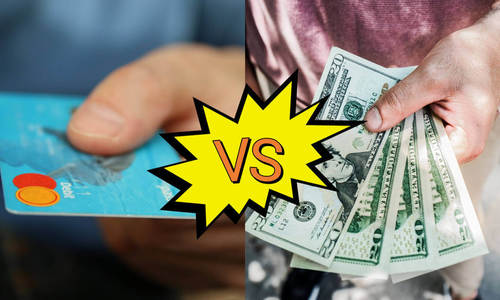 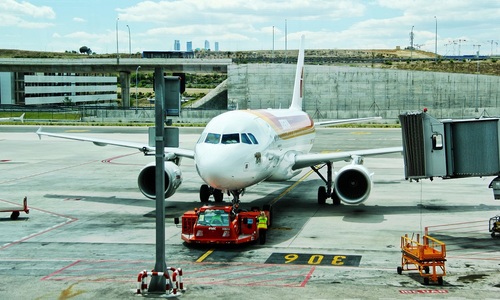